Introduction
In the course of studying meadow streams in the montane and subalpine zones of the Rocky Mountain Region, I have had considerable difficulty finding good reference reaches. On nearly all of the undisturbed meadows with stream orders 1-3 (and occasionally 4), channel morphology and function is controlled much more by beaver activity than by any other factor. Single-thread stream channels are often the exception rather than the rule; with multiple-channel, ponded beaver dam complexes a more common occurrence. Beaver-controlled stream systems are natural and stable. They are often the historical pristine condition, and are commonly a stable endpoint of natural channel/riparian evolution. They possess a unique suite of ecological functions that are quite different from other defined stream channels, and should therefore be recognized as a legitimate, naturally occurring channel type in stream classification schemes. I propose the definition of a new stream type to recognize channels that have form dictated primarily by beaver activity.
Much recent progress in stream science and restoration technology can be attributed to the development of useful and accurate systems for stream classification. At the present time, the Rosgen classification scheme sees the most widespread use, and is the basis for widely used methods of stream assessment, restoration, and research. Categorizing stream channel types based on numerous morphological variables, the scheme adequately covers most stable stream channels found in nature. Unfortunately, the system currently has no effective means for dealing with smaller streams that take their form primarily from the dams, steps, ponds and braids that are maintained by beavers, and this leads to confusion among scientists and practitioners. Recognizing the beaver-dominated stream as a legitimate, unique channel type within the Rosgen classification system is an effective way to remedy this situation by accounting for this common natural channel type. A logical name for this class is DB. ‘D’ implies the multiple-channel nature of these reaches, while the subscript ‘B’ may be considered a descriptor for ‘beaver’ or ‘biotic’ control as opposed the existing stream categories of D for braided systems or DA for anastomosed. 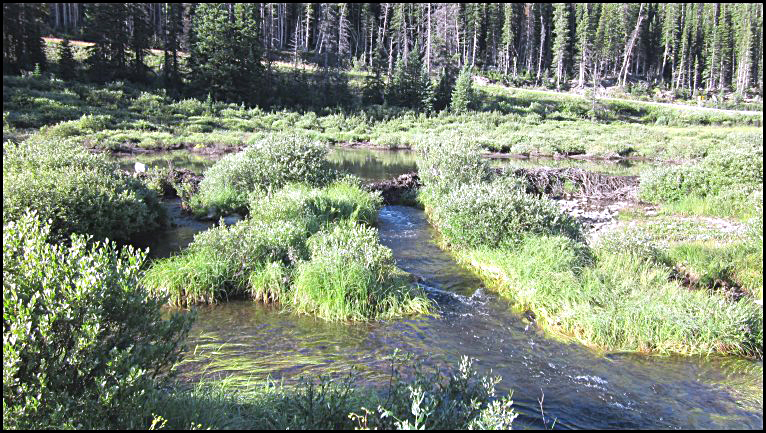